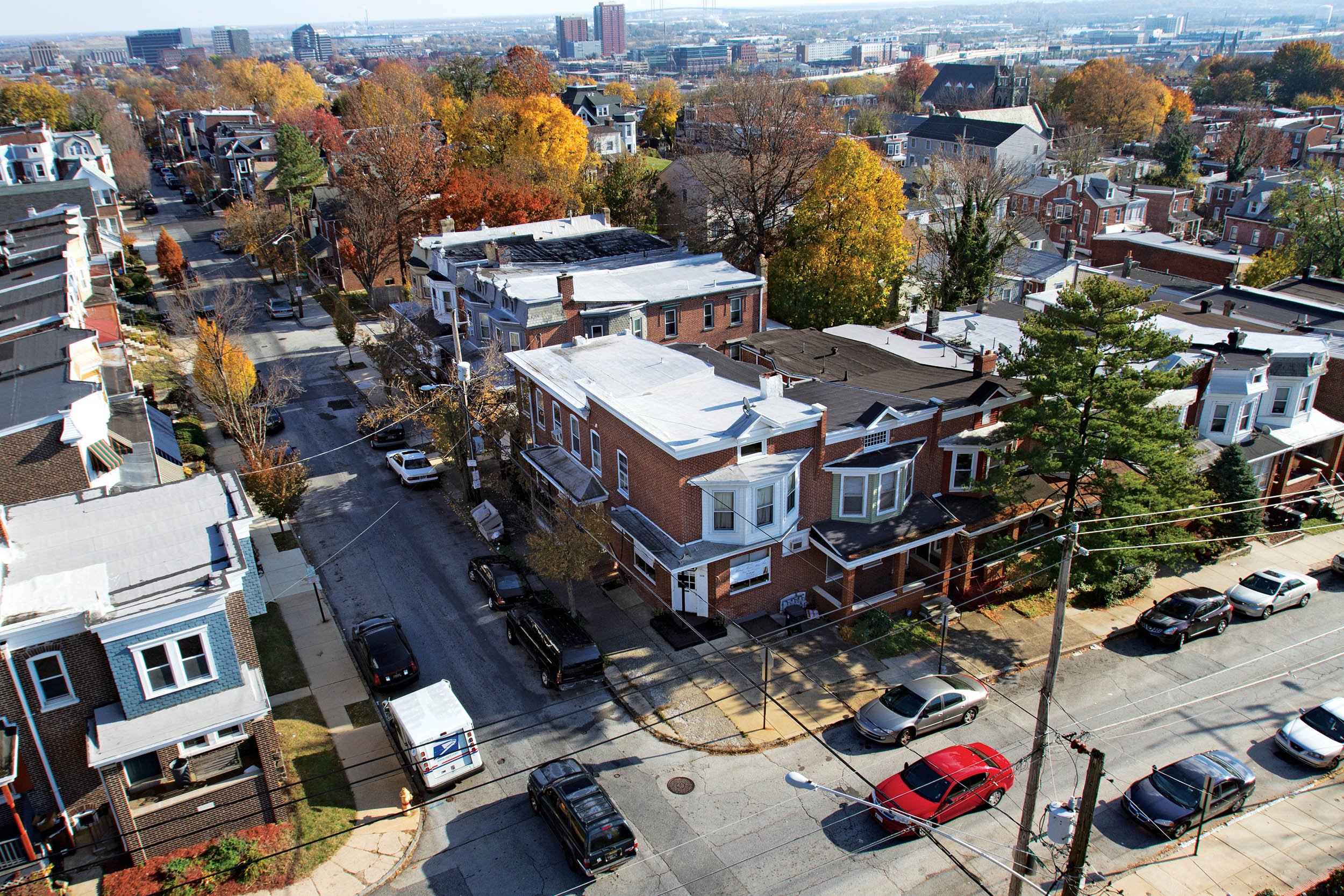 
I have no argument that the streetcar is faster. However, it is far more pleasant — which leads to less time and worry attributed perceptually to the ride. I regularly walk 30 minutes instead of taking the bus for 10 minutes. But I would take the 10 minute streetcar, maybe even the 15 minute one. Travel time is a useful measure, but it is not always the most important one. Indeed, the LID commitment is the first requirement before City Council will even entertain a streetcar project. I think you are making a mistake in looking solely at mobility rather than access.

By fostering a more compact form of development streetcar allows people to meet their daily needs with fewer trips or shorter trips and shorter trips are less likely to be auto-oriented. But access increases tremendously.

The End of the Trolley Line - The True Story of a Murder in a Small Town by Carol W. Baldwin

Nice post. In Portland with the level boarding and push ramp that comes out from under the door, a wheelchair or stroller can load like anyone else. We have low floor buses in Oakland and some of the wheelchair loading has taken 5 minutes, a lifetime in transit schedules. That alone is a huge mobility issue. This however is not the case where Streetcars do not have low floors. In San Francisco access is hampered by the lack of many ramps and in places like Little Rock or Kenosha, wheelchair lifts are the same as they are on buses.


Wikipedia is a pretty good source for rubber versus steel. The relevant articles are Rubber-tyred metro , Guided bus , and Rail transport. The travel time issue is different. Bunching and high load factors then lead to long queues, which lead to excessive dwells. Kneeling bus or not, you still have to squeeze wheelchairs and strollers through the narrow space next to the driver. And we can agree that even though we may not know why, we do know that two routes that are equal in all respects except mode, the streetcar will have higher ridership.

This higher ridership is desirable, because it will cause higher density development. There will be more housing, more retail, more office compared to what the area had before the street car. But either way, there are more people. Without the increased density, this new development would have happened out in the suburbs. From a broader urban planning perspective, there are a few other reasons why streetcars might be good, including development, greening the city, and so on.

In traditional Soviet transit planning, the streetcar was actually at the top of the urban transit hierarchy, above the trolleybus and bus. Generally in city centers the lines ran in mixed traffic, and on the outskirts they ran in reservations along the side of a boulevard. Incidentally, Russia is the only place I know of that had MU trolleybuses. Note that the argument based on likely future improvements to the bus suggests that traditional historical roles of streetcars may not be relevant to the future.

I am a somewhat regular bus rider and occasional MAX rider. Using an iPhone to look up transit directions on-the-fly makes the bus system legible through the virtual world. The fact that Streetcar tracks show where the vehicles travel means little to me but is useful for non-fancy-mobile-phone-owning passengers. This is another example of how current technology is shifting parameters that had previously favored streetcars over buses. It does seem to me that arguments in favor of streetcar are mostly cultural.

Generally speaking, people who own nice condominiums feel streetcar is an acceptable transit mode for people for them.

MURDER IN A SMALL TOWN: Based on a True Story

Buses not so much. I apologize if this appears provocative. I like riding streetcars but am not sold on widespread investment in them. I would be curious to see what data TriMet and Portland Streetcar have on ridership demographics between Streetcar, MAX, and bus, and the level of overlap. If true, this is a bad thing. Passengers should perceive and experience each transit service type as an interconnected part of a larger system.

Investing in streetcar at the neglect of bus service, and, more crucially, including the sorts of features people expect from streetcar signal priority, dedicated ROW, etc. I sense a certain amount of self-fulfilling prophecy. The historical roles of the streetcar in pre-WWII cities was pretty much the same as buses today.

Thanks for all your thoughtful feedback.


As I mention in the expanded version, I think there's very strong reason to believe that the subjective differences between bus and streetcar will shrink over time, which suggests in turn that all forms of high-quality mobility will become more equal in their ability to stimulate development. It's a speculation but an informed one.

However, the difference in the long run may very well remain substantial. Buses run on roads, and that places a very severe limitation on how smooth their ride can be.


The more buses try to emulate rail, the more high-tech — and consequently expensive — they need to become. At some point you will have to concede that trains are both better and cheaper at being trains.

https://gowadybyca.ml Once you accept that, you can spend some of that futile train-emulating money on providing more frequent and extensive bus service, and on trains where warranted. In , new trains and buses will be worlds apart, just as they are now, and just as they were 50 and years ago. Regarding mixed-traffic streetcars: If cities develop as we now think they should, and if they do get their light rail and streetcars, there is every reason to think that traffic will actually decline. So mixed-traffic streetcar operation could be a self-fulfilling prophecy, if done right.

Public transit needs to get people to where they need to go reasonably quickly and without undue discomfort — else they will avoid using it. I would really love to see more trolleybuses everywhere. Unfortunately, it seems planners are as convinced that the public is allergic to overhead wires as they are that buses are untenable. Incredible vibration, astonishing noise, comically old-timey fake plastic wood trim.

Not different from the earlys low-floor buses, which were noticeably different from the even older high-floor and even louder still buses. The high end is a low average speed for bicycling, if you take it easy plus get unlucky and end up stopped at every red light. Here is the thing: right now, with the technology and culture we have, streetcars attract more riders than buses.

We must consider how long it will take for bus technology to match streetcar technology and consider that streetcar technology will improve too, especially if it becomes more popular , and spread the streetcar capital cost over that time. Then consider how many more riders will have been attracted to streetcars in that same period. We must also consider cultural issues surrounding buses. Even if you could build a bus that provided just as good an experience for riders as a streetcar, it could take up to a generation for people to lose their cultural aversion to buses.

I think it is because people ARE familiar with riding a bus. A real world experiment would show you why people feel that way. Then ride a bus along the same stretch and compare the two rides. Which is easier to enter and exit? Which has a smoother acceleration? Which has a smoother ride? Which is quieter? Which one shakes and rattles more? As long as your ride is in a rubber tire vehicle on pavement, the ride is going to be jerkier, bumpier and more noisy than riding on rails. There is a reason why the lifetime of a bus is so much shorter than that of a streetcar; running on pavement literally beats them to death.

And whether it is or that fact is not going to change. In many locales, this is an external cost not borne by the transit agency though ultimately borne by taxpayers who fund both the transit authority and the public works department. If transit agencies were subject to fees in order to allocate this external cost, I suspect the streetcar would be a more attractive compare than it is now.

Jarrett, Your post is right on target! Personally I agree with most of your comments and conclusions — including requiring the property owners on the streets where streetcars operate help pay for them.